So I’ve just invented a time machine!!!! Where do you want to go?  Would you travel back to an era long past, before you were born and meet Leonardo Da Vinci?? Would you fly back to your childhood and give your grandma one last hug?  Would you fly forward to get information from the future and use it when you return to now? If you could travel ANYWHERE in time…. Where would it be.. and what year?

I’m fascinated with the idea of time travel.  I have no desire to travel to the future.  The present is hurtling ahead way too quick in that direction as it is.  I’m happy to leave the future as a surprise to be opened only when I reach it.  But I would love to travel back in time.  There are so many possibilities.  Where would I go… and to see whom?  Would I be content to just be an onlooker without wanting to change the past which in turn would change my future which is actually my present. Or would I want to revisit decisions of the past to completely change today?

Now I know for a certainty that it will be an Aussie who finally invents the time machine..How do I know this, you ask? Well, it’s elementary my dear Watson…… Rod Taylor invented time travel in The Time Machine.. he was Australian…. And when the Hollywood bigwigs decided to remake the classic movie.. who did they cast? That’s right.. Guy Pearce.. another Aussie.. so with the way life imitates art, I can surmise it will be an Aussie invention.  Chances are.. it probably won’t be me as I failed science badly at school.  That and Geography.. so I guess making a time machine that would land me in the time and place in the world I wanted to go would be a bit of a stretch for me.. But I would still like to book tickets for a ride, when my fellow Australian  (whoever he or she may be) finally gets it up and running.

The possibilities are endless as to where to go.   I think I would have to go back to the early 1500’s so I could watch while Leonardo Da Vinci creates the masterpiece, The Mona Lisa.  I don’t know why she has captured the imagination of the world.. but I have to admit to sharing the same fascination of her.  She wasn’t particularly pretty…. nor did she look like the life of the party.. No, she was actually quite homely, as my Mum used to say.  She possibly even suffered from a bit of depression if you look closely at her  guarded,  sad eyes.  Ahh but what I could learn by watching the brush strokes of a master at work, let alone what we would talk about.  My IQ would have skyrocketed just by being in the same room as him.  Intelligence by Osmosis…. Yes, definitely Leo is a starting point for me.

Fast forward just a few years to stare in awe as Michaelangelo painted the Sistine Chapel.  Yes, i do love art… It’s something that I’m growing to appreciate more and more with age. But it’s more than that. This was an era when man started to come into his own.  A time when new truths were discovered.  Where man didn’t just accept what he had always been told, but, sparked by an insatiable curiosity, questioned old beliefs and changed forever the way we, as mankind, saw the world.  Yes, there had always been some mention that the world may be round… but until Magellan’s circumnavigation of the world, there was no real answer.  Yes, this era, was without doubt, such an important one.

Fast forward quite a few years to 1964… I want to be at Melbourne airport when the Beatles land.  I want to join the screaming throng who somehow know they are creating history.  I want to get caught up in the moment.. and faint.. and act like a silly teenager.. I want to get a chance to see them, young, boyish, mop top haircuts.. before they lost that particular brand of innocence.  Introducing a new era in music to get ultra excited over.  I never did it over the pop stars of the 70’s, my era.. .. I really didn’t think too many were worthy of that sort of adulation… Mmmmm  except maybe Donny Osmond, David Cassidy and David Essex.  Of course, I’d love to see Elvis.. but The Beatles…. well they revolutionised music in my eyes.

Perhaps I’d take a little jaunt to France ….in the early 1980’s  to sit beside  Claude-Michel Schonberg, Alain Boublil and Jean-Marc Natel while they wrote the music and lyrics to Les Miserables… the musical which stirs my soul like no other.  Perhaps I could distract them while they wrote Dog eat Dog.. as it’s the only song in the show I don’t love, although I’m beginning to make peace with it.  I would sit in quiet reverence at their feet, listening to them create some of the most moving, emotional and passionate music I have ever had the good fortune to listen to.  Yes yes yes.. definitely to France…

There are so many more moments in history which I would love to witness.  And even if I was alive when they happened, I was too young to have appreciated the impact they would have on the world.  The Berlin Wall falling, Neil Armstrong setting foot on the moon, Bruce Gyngel introducing television in Australia, the ending of both World Wars… the moments in history where you just want to have been a part of it.  What would you have wanted to witness?

There are of course the personal moments.  There was a moment in the movie, Peggy Sue got Married, with Nicholas Cage and Kathleen Turner, where Peggy Sue played by Turner, having gone back in time by some medical trauma, answers the phone to her grandmother, long since passed away in her real life time.  I remember watching it and crying my eyes out.. I wanted to answer my phone and hear my grandmother, Gargie’s voice, one more time.  To hear the Irish lilt in her voice.  To be able to tell her how much I love her.  That, is why time travel needs to be invented.  To have that one last hug, or conversation, or question answered.

I’ve often asked myself, would I change the course of time if I could.  It’s not a question that has a simple answer. One part of me, would love to travel back 17 years in time to change history.  To run like hell with my children and never put them at risk.  To save my daughter’s life.  But, in all reality, how would it affect my life  now? I know that sounds selfish, but my life would be nothing like it is now.  Would I have the same relationship I have with my sons?  Would changing the course of history change that? I suspect it would.. So could I, in all honesty, sacrifice the life I have with them now?  Until I lost my daughter, I didn’t appreciate fully how much my children meant to me.  I took it for granted. Since she died, my sons and I have forged a bond so strong, that nothing can break it.  The understanding, love and respect we have for each other is one that is borne of pain and loss.  So could I risk losing that for an outcome I’m not sure of?  I don’t think I could..

But to have one more moment with my girl.. to tell her I’m sorry for all I did wrong..To tell her that my life began the day she was born.  To hear her raspy voice laughing at me, telling me she loved me.. I would give my life for that one moment in time.  but I don’t think I would go back and change the outcome at the risk of my sons.. although every fibre in me, as a parent, would want to.  I would change the way I parented my children.. I’d have stopped sweating the small stuff and just chilled out and enjoyed them more.   If I had a certainty that I could change that part of history and not risk what I have today, of course I would.. but I couldn’t know how it would affect.. so as much as it would kill me, it would be  best to leave the status quo.

I would love to patch up silly quarrels with people, that with hindsight, were never worth losing friendships over.. I would study harder at school… I would keep in touch with people better.. I would moisturise my neck and hands so much earlier than I started. I would have stopped having my hair permed, years before I did and I would certainly have bought shares in Apple.  I may even have tried to purchase a DeLorean so that if I ever met Doctor Emmett Brown we could work together to actually invent this time machine and do all the things I mentioned above.  But as with all time continuums, I’d have to travel through time to have purchased the DeLorean to make the time machine which I’d need to have made before I could go back to purchase it.  confused yet? Me too!!

So until I run into the good Doc Brown, I’ll have to be content with my dvd collection of time travel movies to fuel my burning desire to travel through time.  I’ll have to have the occasional “no undie sunday on the couch” watching Back to the Future, 1,2 & 3… Peggy Sue got Married… The Time Machine….The Butterfly Effect…. and of course, the best Christmas movie of all time with a touch of time travel thrown in…. It’s a Wonderful Life.

Of course, in reality, we actually have time machines here on earth.. We have the internet.. it can transport us anywhere we like in history and we can discover all sorts of things we never knew.. and of course lots of stuff we never wanted to know too… and then, there is the most amazing time machine ever.. Our dreams and memories… No one can destroy those unless we let them.. They can’t run out of petrol, get struck by lightning or be stolen by creatures from another time.  They are ours to keep.. So on that note… I’m going to head off to bed and strap myself into my dream machine….. back to another time….. when life was… different.. not necessarily better.. not necessarily worse.. just different… 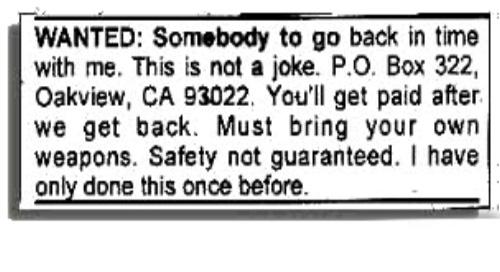