(please note… this event has esoteric themes, psychics, angels etc, which may be in complete contrast to someone else’s beliefs.  I have come to these beliefs in my search for peace over my daughter’s death.  I respect your rights to have your own beliefs and would never argue them with you so please do not use the comments to argue your difference of opinion, whether that be from a theological, skeptic or atheist point of view.  Thank you )

Do you believe in angels? I do! I’ve had quite a few experiences that have reinforced my belief. As many of you will know, I lost my daughter tragically 17 years ago.  She was only 10 years old when she left me and I struggled to think that such an amazing soul could suddenly just be gone.  She was funny, vibrant, cheeky, loving and so mature for a girl of her age. I believe she came to this lifetime to teach me to love completely.  When she was so cruelly taken from this earth, my heart broke and I couldn’t see how I was possibly going to live the rest of my life out in that overwhelming pain.

Let me describe Aimee to you.  The first thing people noticed was her red hair.  She wasn’t the real bright redhead but had gorgeous, long bright strawberry blonde, bordering on ginger.  It was a beautiful color. Her hair was wavy but around the hairline it was curly, so any short bits would be hard to control.  She had slightly almond shaped, bright china blue eyes, a huge smile that split her face when she laughed and her skin was very very pale with the obligatory redheaded freckles.   She was going to be reasonably tall, probably somewhere between 5’6 and 5’10 I’d say and had strong sturdy legs and although not fat, she certainly wasn’t a thin child.   She had my hands and legs, poor kid.  I have short, fat stumpy fingers with short fat stumpy fingernails.  So did she.  I also have legs that are reasonably straight on the outside but on the inner leg, at the knee, the leg is quite large.  I also have thick ankles (sigh).. and she was exactly the same.  I believe she would have turned into quite a beauty if she had been given the opportunity to grow old.

She wanted to be an artist.  She was a very creative child and loved painting and drawing.  Her imagination was brilliant and she thought outside the box a lot.  Her dream was to study art and especially animation and end up working for the Disney Corporation.  We are all big Disney fans and she was enamoured by the work of Disney so wanted to be a part of it.

There was so much more to her than just the physical that I have described to you, but I’m telling you this for a reason.  About 3 months after my beautiful girl left us, I walked into a restaurant I had been into heaps of times and suddenly noticed a new picture on the wall.  I nearly fainted.  Here looking out at me, adorned with butterfly wings and being hugged by another little angel was Aimee.  There was no doubt at all that  it was her.  There is still no doubt.  The angel looking down sadly in this painting was Aimee.  Her coloring, her stature, her features, her fingernails and her knees.  Someone had painted a picture of my girl.. but who?

I became obsessed with finding out more about this picture, wondering who had painted my girl and not told me.  As it turned out, this painting was created over a hundred years prior to her being born. It was actually created in 1890 by William-Adolphe Bouguereau and is entitled L’Amour et Psyché, enfants translated it means Cupid & Psyche as children. How then, did it come to be that Mr Bouguereau painted the absolute likeness to my darling 100 years before she was even born? And interestingly, Aimee is of course the french equivalent of Amy but a derivative of the word Amour, meaning love, and which is in the title of the painting. This painting is often referred to as the first kiss and well before she died, I had a photo of Aimee kissing Lachlan when he was born and labelled it in her album as “The First Kiss” without ever having seen or heard of this painting.

I was really struggling with the grief that was more than any human should ever have to bear.  Now I had been given the struggle of immortality and faith.  What did I really believe in?  I do believe in life after death, always have.  I can’t see how strong, vital souls can suddenly be snuffed out with no trace of their existence other than a grave.  I don’t believe that life just suddenly ends when we die and I don’t want to believe it.  I do believe that our lives on earth are just a tiny part of our existence.  But this painting left me with more questions than answers.

I went to a psychic about 6 months after Aimee died.  I had been to this woman before and she was completely accurate with what she told me that first time.  I will share that story with you at a later date.  When it comes to psychics, I am always slightly skeptical.  Not because I don’t believe in the gift, as I certainly do, but because I think a lot of people WANT to have the gift and don’t have it as strongly as they believe.  It is also an industry where there are a lot of charlatans sadly, so I am always happy to sit back and say nothing but let them tell me what they know. Although I had seen this woman before, I did the same thing.  I went in completely poker faced and said nothing. I gave no indication of having lost a child or even wanting to know about loved ones who had passed over.

She started by looking at me and saying, “I have a little girl here who has paintbrushes and crayons and pencils in her hands.  She says she belongs to you”.  I knew Aimee was there with me.  Now before I go further, you need to know, I never felt her really leave.  Her presence around me was so strong all the time that I thought at times I was going mad.  So to hear confirmation that it was definitely her, was a relief.  She then proceeded to tell me that she was sad because she missed me so badly and struggling to be away from me but was being comforted by another of my children, a boy called Robert.  I had been pregnant before Aimee was born and in my heart of hearts I knew it was a boy. She described Robert to me, with his dark curly hair, and I knew it was the little boy in the painting who was comforting the butterfly winged angel. She told me that although I hadn’t named him, my grandmother had and had chosen Robert.  Robert just happened to be Gargie’s son’s name and was a name she loved.

She (Aimee, speaking through the psychic) told me that she remembered the accident and when the car had stopped, she climbed over something to get out of the car and was horrified to realise it was her own body.  She said my grandmother (Gargie) was there to meet her and take her home.  She said it was really difficult but Gargie comforted her.

She also told me that she was at her funeral.  She pointed out the corner of the church she was standing in during the service.  I have to tell you here, that during the funeral service, the minister said, “Aimee would love it if she were here today” (referring to all the bright colors and balloons and artworks around the church). As he said it, a wreath of white flowers shaped into a teddy bear fell off the lattice it was wired onto and onto the floor.  It gave us all a jolt and I heard many whispers around me of… “oh she’s here alright”.

She also told me that she loved what I did at the funeral because I looked up, not down.  This was referring to my decision to have 300 brightly colored balloons released into the sky rather than flowers thrown onto her grave.  When I made that decision, I said to the funeral parlour lady, Mary, “I can’t look down, I have to look up”. I knew I couldn’t bear to see her coffin being interred. She said she loved the fact that I had put a doll with a blue nose in the coffin with her.  Now, this really threw me, as I had put a teddy bear with a blue nose in her coffin, after everyone had left the final viewing.  If you were just guessing, would you really guess a blue nose?

There was so much more that came out of the reading but some of it was only for her brothers, my mum and me and I’d prefer it to stay that way.  But needless to say, I had confirmation that the painting was indeed Aimee (and my unborn child) and by some unknown force, it had been painted 100 years ago to give me strength and peace in the year of 1995.

It is interesting to note that in angel mythology, butterfly wings denote a new angel.  The more traditional feathered wings are symbolic of an established angel.  So I understood why she had butterfly wings compared to the little boy’s angel wings.  In the painting, her look of sadness is obvious.  Aimee very rarely wore her hair up right on top of her head as the angel had, however, when I went to identify her body in the morgue, they had piled her hair up on her head in this exact manner and the tiny ringlets around her hairline were obvious as a result.

I had friends go straight out and buy me a print of the picture after they had seen it, so I now have two framed prints of it in my house.  When my sister Irene walked in after I had put one up, she just stood mesmerized and asked me where I had the picture of Aimee painted.  Everyone who saw the painting said it was definitely my girl.  I thank the angels who inspired Mr Bouguereau to paint this picture in 1890 to comfort me in  1995.  It has given me so much strength over the years. Compare the photos and see if you can see the likeness.  I guess the biggest problem in comparing the two pictures, is that Aimee was usually laughing in all the photos I have of her so the facial expression is so different.  I have found two where she wasn’t quite so joyous.

I’ve never yearned to own any famous painting or indeed any art collection at all, but this is one I would love to own as I feel it was painted specifically for me, albeit it 100 years before I needed it. 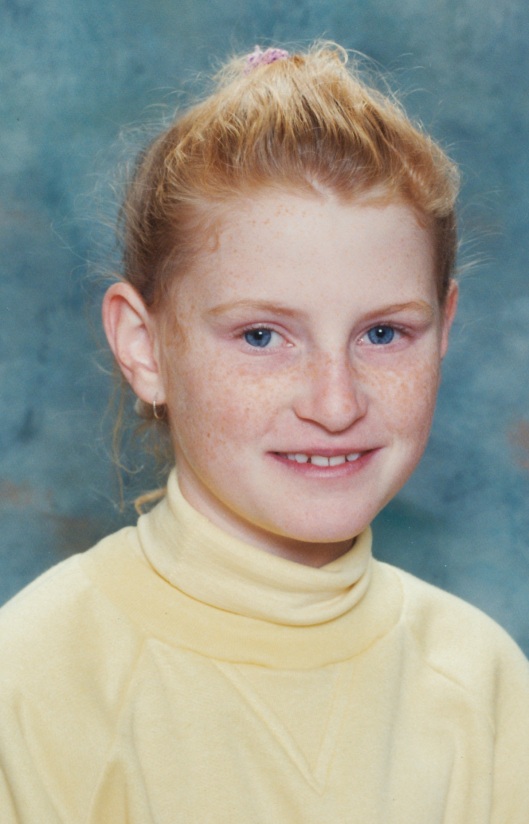 22 thoughts on “A heavenly sign from a much loved angel”