This is the 4th part of the YaYa Diaries taken from my trip in 2006 to Perth West Australia.  If you haven’t heard of the movie, go to book and movie reviews and read all about the Divine Secrets of the YaYa Sisterhood.

So this is day 4 into the trip but our 3rd full day in WaWa Land.

We must be adjusting to Perth time now because we slept in a bit longer today.  For those of you who don’t know, Perth is 2-3 hours behind the East Coast of Australia depending on Daylight Savings time.  We had to be down at Gateway shopping centre before 12 noon as we had to put our  entries in the box for a plasma TV.. I think they must have lost our numbers coz we were supposed to win it and didn’t.  So after our ritual breakfast on the deck, we threw our clothes on and headed to the shops.. We left Sal; at home as she had odd jobs to do.. (since she didn’t do her yard duty when she was supposed to).

Annie, Chop and I headed off and got to Gateway with lots of time to put our entry forms in then headed to the supermarket. Annie started the big shop while we stocked up on the drinkies.  I went to find Annie while Chop impatiently tapped her tootsies outside.  Annie took as long as she could but I finally dragged her out.  Chop and I were looking forward to getting to RED DOT. They have a Red Dot in the middle of their supermarket here, instead of in the middle of their forehead.  Anyway, we wandered into the Dot and bought some great little trinkets.  One of our favorite things (I sounded like Julie Andrews there for a brief moment in my head), was a Dr Fart Machine.  It is really amazing.  6 different styles of farts from the squeezer to the big, sloppy ones.  It doesn’t get much better than that really.  And it raised the question…… who the hell thinks of these things?  Chop and I both bought a lie detector but we also bought el cheapo batteries to go in them so you only got 2 lies out of them before they labour miserably.  Annie bought some new solar lights, which were Chop’s responsibility to charge up.  I have to give her credit here as she took the role seriously and by the time evening came, they were glowing splendidly.  We then headed off to the petrol station to fill the gas bottle and then headed home to check on Sal.

She had done her yard duty this time and was dutifully in the middle of putting the beautiful mosaic house number that she made up on the wall.  Chop and I decided we would take credit for having made it when people noticed it.. They’ll believe us.  After she finished that job, we set her to work on some serious gardening. Annie has lots of hanging baskets that needed some plants, so Sal got to work on some Tinnie flowers and soon the whole deck was looking special.  For those of you who haven’t seen tinnie flowers, they are made from cans after you’ve emptied them.  They look spectacular.. if very much like aluminium.

Annie decided we needed a special treat for being good girls and doing all our chores so she filled up the two person spa in her bedroom and the three Vic chicks all got in (that’s Chop, Sal and me). She put a movie on for us.  It was one I’d been wanting to see called Just like Heaven, with Reece Witherspoon and Mark Ruffalo.  She filled up an esky with our drinks of choice, added some smelly stuff (bubble bath) to the spa water ad the three of us jumped in ready to have a relax.  Now remember here, it’s a 2 person spa and there were  3 of us in there.  So we   kind of resembled a Celtic Knot with our legs intertwined to get as much water space as possible but we all seemed to have forgotten to shave our legs, so it was a prickly Celtic Knot.  Ah well… what’s a bit of stubble between friends?

The movie was good but even better was Chop’s surmising of what MIGHT happen.  Was she dead? Was he dead? Did he see dead people? Did she see weird people? What was really happening? but thankfully it all finished well and we did the Awwwww factor at the end of it.  We had to have the television very loud so we could hear it above the bubbles and Annie’s family.  Sounded like feeding time at the zoo in the kitchen, but I guess the family that yells together, gels together.  The Junior Cap girls (from here on in known as the Petite YaYa’s) who were visiting ended up watching the end of the movie with us.  They watched from the bed though as there was definitely no room in the spa.  The water was beginning to get a bit scummy by that time anyway, so we decided to get out, shower and start to prepare for the night’s festivities.

We spent a bit of time making ourselves beautiful all over again and did some preparations for outside.  I went back in and changed again as I didn’t like   what I had on.  Went out, put a few chairs around and went back in and got changed again as it still wasn’t right.  We made a few nibblies from the  food pyramid and and I got changed again.  I knew I hadn’t brought enough clothes with me.  We went outside to view Chop’s handiwork with the solar lights and let me tell you, it was so bright, all she needed was ping pong paddles and she could have landed a plane there.  I then went back inside and changed into my original outfit.  Now we were finally ready so poured a drink to calm our nerves.  Well Sal and I anyway.  Chop was cool, calm and collected as per usual.  She just went and sat in her little room down near the bungalow and solar landing strip and watched out for bandicoot bandits.

We needed to give people some indication of which driveway to turn into, so we blew up a couple of large rabbit balloon, which we hoped might look like bandicoots.  Petite YaYa Up to No Good (aka Junior Cap Peta) blew up the first balloon.  Now she may only be little but she really does have some air in those lungs as  the first mr rabbit exploded.  Chop decided I should blow up the next one, so I took a BIG deep breath and blew as best I could….. nothing……. So I blew again….. nothing again.   Now failure is not my middle name, so I had to find a way around this dilemma.  I pulled on the rabbits ears to stretch them, hoping that might let some air in but no, they such tight little tubes, nothing could penetrate.  I blew it up so all the air was in the head, and then Chop and I tried to push air from the head into the ears… BINGO… finally it worked.. Well in one ear anyway.  We tried the same thing in the other ear but couldn’t make the magic happen.  We made the best of the situation and decided to call it our “one eared fake bandicoot which was really a rabbit”…sounded fine to us. We tied it to a bamboo stake leftover from the Tinnie flowers and tied it to the fence post.

Then evening time finally arrived.. Oh boy oh boy!!!! It’s party time… Sassy and Lean were the first to arrive.  (In case I haven’t explained it… Tonight’s guests are all from the chat room we all chatted in so the names may be a bit weird, but it’s what we call them). Running a close second to arrive was Pianoman and Terri.. I can’t remember the order of the others but those present were Bozzy & Bev, Wayne Perth, Chrissy, Beechy, Knight Eyez, Myra, (who was late.. tsk tsk) & Peter, Wape and Ned, Ned’s little brother (Chop named him “him in the fridge Alex”), Paige, Wicked Woman, Kareyn and Musicman, KarenWa (who was not only late but dressed in really bad colors…. Annie tells me its the Fremantle Dockers colors.. but they really are awful), Basia, Dare & Ron and WWW & her new fiance.  I hope I’ve remembered everyone.

After a bit of socialising, the karaoke started.  Ned made an excellent sound technician and I helped out with the occasional 1.. 2.. 1… 2.  I don’t think he really needed or wanted my help but I’m just nice like that.  We did a rousing rendition of Puff the Magic Dragon with Chop providing the actions.  She did have to be reigned in a few times when words that had a naughty connotation came on, but overall, she did a marvelous job.  The theme to Gilligan’s Island proved to be another  huge hit, with members of the soiree putting their hands up to be the 7 stranded castaways.  During the night, Sal and Chop forgot one vital part of a successful night in Perth…. protection from the terrorist quokkas and the bandicoot bandits (feral little animals with a nasty attitude lol) So armed with a tin of tin foil and drinks in hand, they  headed down the driveway to apply protection to our driveway mascot (aka the one eared fake bandicoot who is really a rabbit) and he seemed to like his new tin foil hat.  It must have worked too, as not one feral terrorist quokka or bandicoot bandit invaded the soiree.  These girls really are amazingly clever.  I’m in awe of the lengths they will go to to protect us from the native animals.  They then proceeded back to the party    where these shy and retiring girls took over the microphone, not letting anyone else have a turn.

Chop had been practising her curtseying technique and apart from a few side steps when she held her position too long, she did a sterling job and we were most impressed and even asked for an encore.  Musicman looked adorable in my YaYa headdress  but I think he might have liked it way too much.  The other men in the group were eying it off too.  I think they all wanted to wear it but were too frightened to ask.  Lots more happened but I think I must have killed off a          few brain cells.  Still it was a fantastic night and so good to meet the people we’ve been chatting to for years.  Thanks Perthies for making it such a great night and thanks again to our host mum and dad, Annie and Gary, for their hospitality.  I think we may have to cook breakfast for Gary on waking, as it is father’s day.  I headed off to bed… too tired to think anymore.. My brain hurts.. Tomorrow is another day.. 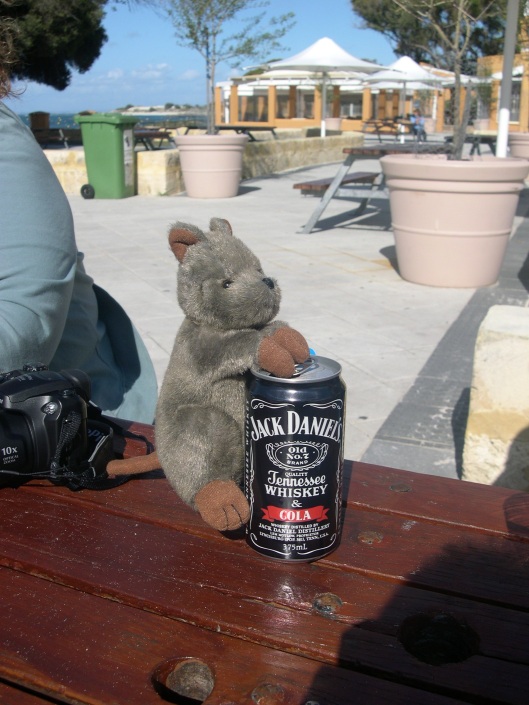